Learn More About The Acts In Our Show

Broadway Theatre are the theatrical performances presented in the 41 professional theatres, each with 500 or more seats, located in the Theater District and the Lincoln Center along Broadway, in Midtown Manhattan, New York City. While the term "Broadway" comes from the street, Broadway, it is best described as a theatre district as not all Broadway theatres are located on this street. Not all Broadway shows are musicals. Broadway productions and artists are honored by the annual Antoinette Perry Awards (the “Tony Awards”) given by the American Theatre Wing and The Broadway League, and that were first presented in 1947. The Tony is Broadway's most prestigious award, comparable to the Academy Awards for Hollywood film production. 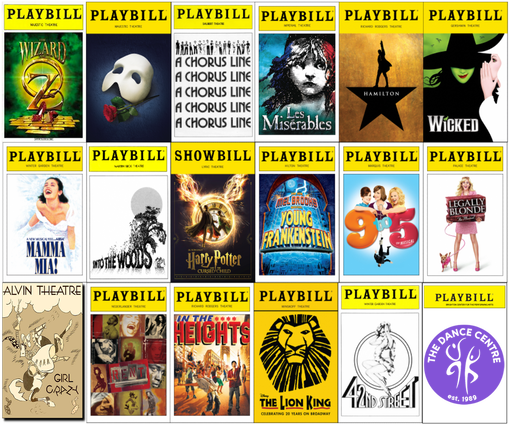 ACT I – THE WIZARD OF OZ

When a tornado rips through Kansas, Dorothy is whisked away to the magical land of Oz. She wakes in Munchkinland and is advised by Glinda, the Good Witch, on how to return home. Glinda knows of only one person who might know how to help Dorothy return home: the Wizard of Oz. Dorothy is directed to follow a yellow brick road that goes to the Emerald City, the Wizard's home. En route to meet the Wizard, she meets a Scarecrow that needs a brain, a Tin Man missing a heart, and a Cowardly Lion who wants courage. The foursome eventually reaches the Emerald City, despite the best efforts of the Wicked Witch and her army of Flying Monkeys. The Wizard of Oz then grants the wishes of Dorothy and her three friends by giving them tokens, but reminds them they always had the qualities they sought.

ACT II – THE PHANTOM OF THE OPERA

From his hideout beneath the 19th century Paris Opera House, the brooding Phantom schemes to get closer to vocalist Christine Daae, wreaking havoc on the theatre if his orders are not met. The Phantom is a shadowy musical genius and a magician who is shamed by his physical appearance and feared by all. His one companion is his singing protégé, Christine, who is mystified yet terrified of her unseen tutor she knows only as the Angel of Music. When the Phantom reveals himself, Christine is irresistibly drawn through the mirror to the Phantom, who leads her down into the eerie sewers below the Opera house. In his lair, the Phantom confesses his love for Christine. The Phantom’s love is not returned, resulting in disastrous consequences.

Chorus Line
Original Run on Broadway: July 25, 1975 – April 28, 1990
Shubert Theatre
https://www.ibdb.com/broadway-production/a-chorus-line-3752#Awards
Centered on seventeen Broadway dancers auditioning for spots on a chorus line, the musical is set on the bare stage of a Broadway theatre during an audition for a musical. A Chorus Line provides a glimpse into the personalities of the performers and the choreographer as they describe the events that have shaped their lives and their decisions to become professional dancers.

Les Misérables
Original Run on Broadway: March 12, 1987 – May 18, 2003
Broadway Theatre, Imperial Theatre
https://www.ibdb.com/broadway-production/les-misrables-4443#Awards
Set in early 19th-century France, Les Misérables is the story of peasant Jean Valjean and his desire for redemption, released in 1815 after serving nineteen years in jail for stealing a loaf of bread for his sister's starving child. Valjean decides to break his parole and start his life anew after a bishop inspires him with a tremendous act of mercy, but a police inspector refuses to let him escape justice and pursues him for most of the play. Along the way, Valjean and a slew of characters are swept into a revolutionary period in France, where a group of young idealists attempt to overthrow the government at a street barricade in Paris.

The music we use in our “Les Misérables” is not an original musical number, but rather a creative interpretation of the story.

Hamilton
On Broadway: August 6, 2015 – Present
Richard Rodgers Theatre
https://www.ibdb.com/broadway-production/hamilton-499521#Awards
Featuring a score that blends hip-hop, jazz, R&B, and show tunes, this history-inspired story follows the remarkable life and political career of Alexander Hamilton, one of the Founding Fathers and who we still see on the ten-dollar bill. He was a key player in the American Revolutionary War and in the shaping the government, policies, and Constitution of the newly born United States of America.


Wicked
On Broadway: October 30, 2003 – Present
Gershwin Theatre
https://www.ibdb.com/broadway-production/wicked-13485#Awards
Wicked looks at what happened in The Land of Oz, but from a different angle. Its plot begins long before Dorothy arrives in the Land of Oz, from the perspective of the witches who live there. Wicked tells the story of two unlikely friends, Elphaba (the Wicked Witch of the West) and Galinda (Glinda the Good Witch), whose relationship struggles through their opposing personalities and viewpoints, same love-interest, reactions to the Wizard's corrupt government, and, ultimately, Elphaba's private fall from grace.

The music we use in our “Wicked” is not an original musical number, but rather a creative interpretation of the story.

Mamma Mia!
Originally on Broadway: October 18, 2001 – September 12, 2015
Winter Garden Theatre, Cadillac Winter Garden Theatre, Broadhurst Theatre
https://www.ibdb.com/broadway-production/mamma-mia-12925#Awards
Donna, an independent hotelier in the Greek islands, is preparing for her daughter's wedding with the help of two old friends. Meanwhile Sophie, the spirited bride, has a plan. She secretly invites three men from her mother's past in hope of meeting her real father and having him escort her down the aisle on her big day. Told through the legendary music of ABBA, Mamma Mia! has become a worldwide sensation that has audiences everywhere dancing.

Into the Woods
Originally Run on Broadway: November 5, 1987 – September 3, 1989
Martin Beck Theatre (now Al Hirschfeld Theatre)
https://www.ibdb.com/broadway-production/into-the-woods-4486#Awards
The musical intertwines the plots of several Brothers Grimm fairy tales, exploring the consequences of the characters' wishes and quests. The main characters are taken from "Little Red Riding Hood", "Jack and the Beanstalk", "Rapunzel", and "Cinderella", as well as several others. The musical is tied together by a story involving a childless baker and his wife and their quest to begin a family, their interaction with a witch who has placed a curse on them, and their interaction with other storybook characters during their journey.

The music we use in our “Into the Woods” is not an original musical number, but rather a creative interpretation of the story.

Harry Potter and the Cursed Child
On Broadway: April 22, 2018 – Present
Lyric Theatre
https://www.ibdb.com/broadway-production/harry-potter-and-the-cursed-child-parts-one-and-two-514844#Awards
The story begins nineteen years after the events of the Harry Potter and the Deathly Hallows novel and follows Harry Potter, now Head of the Department of Magical Law Enforcement at the Ministry of Magic, and his younger son, Albus Severus Potter, who is about to attend Hogwarts School of Witchcraft and Wizardry.

The music we use in our “Harry Potter and the Cursed Child” is not an original musical number (it is not a musical!), but rather a creative interpretation of the entire Harry Potter series.

Young Frankenstein
Originally on Broadway: November 8, 2007 – January 4, 2009
Hilton Theatre (now Lyric Theatre)
https://www.ibdb.com/broadway-production/young-frankenstein-457590#Awards
Dr. Frankenstein aims to fulfill his grandfather's legacy by bringing a corpse back to life. With help and hindrance from his servant, assistant, and fiancée, his experiment yields success, and unexpected consequences. Young Frankenstein is a hilarious take on the classic horror story, combining zany antics, a witty script, and high energy comedic performances for one unforgettable, hilarious adventure in Transylvania.

The music we use in our “Young Frankenstein” is not an original musical number, but rather a creative interpretation of the story.

9 to 5
Originally on Broadway: April 30, 2009 – September 6, 2009
Marquis Theatre
https://www.ibdb.com/broadway-production/9-to-5-480320#Awards
Pushed to the boiling point, three female coworkers concoct a plan to get even with the sexist, lecherous, and pompous man they call their boss. The women give their workplace a dream makeover, taking control of the company that had always kept them down.

Legally Blonde
Originally on Broadway: April 29, 2007 – October 19, 2008
Palace Theatre
https://www.ibdb.com/broadway-production/legally-blonde-423552#Awards
This musical follows the transformation of Elle Woods, who appears to have it all, as she tackles stereotypes and scandal in pursuit of her dreams. Her life is turned upside down when her boyfriend dumps her so he can attend Harvard Law. Determined to get him back, Elle ingeniously charms her way into the prestigious law school. While there, she struggles with peers, professors, and her ex. With the support of some new friends, though, Elle quickly realizes her potential and sets out to prove herself to the world.

The music we use in our “Legally Blonde” is not an original musical number, but rather a creative interpretation of the story.

Girl Crazy
Originally on Broadway: October 14, 1930 – June 6, 1931
Alvin Theatre (now Neil Simon Theatre)
https://www.ibdb.com/broadway-production/girl-crazy-11231
In this pre-Golden Age musical, Danny, a wealthy Manhattan playboy, is sent West by his father to manage his family’s ranch and learn to focus on business. He finds himself in Custerville, Arizona, a sleepy town with a mostly male population. Danny quickly turns his family ranch into a dude ranch, importing Broadway showgirls and trying to make money off tourists. Filled with the beloved songs of George and Ira Gershwin, Girl Crazy is a charming romantic musical comedy that will have audiences dancing in their seats.

Rent
Originally on Broadway: April 29, 1996 – September 7, 2008
Nederlander Theatre
https://www.ibdb.com/broadway-production/rent-4791#Awards
Rent follows the ups and downs of a year in the life of a group of impoverished, artistic friends living in Manhattan’s East Village. The group’s dreams, losses, and love stories weave through the musical’s narration to paint a stunningly raw and emotional portrait of the gritty bohemian world of New York City in the late 1980s, under the shadow of HIV/AIDS.

In the Heights
Originally on Broadway: March 9, 2008 – January 9, 2011
Richard Rodgers Theatre
https://www.ibdb.com/broadway-production/in-the-heights-465745#Awards
The story is set over the course of three days, involving characters in the largely Dominican American neighborhood of Washington Heights in Upper Manhattan, New York City. This revolutionary new musical combines Latin rhythms and dance with hip-hop lyrics to tell a captivating story about what it means to chase your dreams as you cling to your roots, and to celebrate the community from which you grew.

The music we use in our “In the Heights” is not an original musical number, but rather a creative interpretation of the story.

Lion King
On Broadway: November 13, 1997 – Present
New Amsterdam Theatre, Minskoff Theatre
https://www.ibdb.com/broadway-production/the-lion-king-4761#Awards
The highest-grossing show in Broadway history.
The Lion King is the story of Simba, an adventurous and energetic lion cub who is next in line to be king of the Pride Lands, a thriving and beautiful region in the African savanna. The Lion King is a story and a spectacle about identity, family, and responsibility that is enjoyed worldwide by people of all ages.

42nd Street
Original Run on Broadway: August 25, 1980 – January 8, 1989
Winter Garden Theatre, Majestic Theatre, St. James Theatre
https://www.ibdb.com/broadway-production/42nd-street-3963#Awards
42nd Street follows the rehearsal process of a Broadway show being put on during the height of the great depression. One of show business’s most classic and beloved tales, 42nd Street tells the story of Peggy Sawyer, a talented young performer with stars in her eyes who gets her big break on Broadway. Peggy arrives in New York City from her hometown of Allentown, Pennsylvania, armed with her tap shoes and big dreams. Peggy’s rise from showgirl to star is the stuff of show business dreams. 42nd Street is full of crowd-pleasing tap dances, popular musical theatre standards, and show-stopping ensemble production numbers.